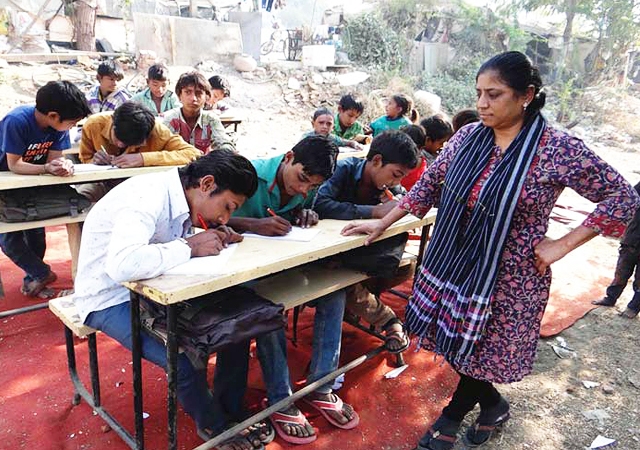 Slum Shine is a non-profit organization with an aim and spirit to decrease the poverty with this movement. We are known for motivating slum people towards education for themselves as well as for their next generations.

At our organization, we are working for slum children who used to live on the footpath of Indian urban life. Mostly they are born in the third generation of people living on the footpath. Often they are involved in garbage collection activity. They are earning by collecting garbage only. Our survey report of such 2300 children shows some astonishing fact about that their mentality.

Whenever we asked, “What is your hand is for?" In response, 80 % of children answered that “Our hands are for collecting garbage and eating." We approach this neglected children who are by heart millionaire. We try to change their mindset to make them educated on roadside school. Our school is running at Gulbai Tekra slum near university area of Ahmedabad.

Our mission is to work on the root causes of changing the minds and motivate the people of the slum community. By this movement, we want that every slum people take proper education for themselves and stand tall with a rapidly growing society.

Because one person can not create a better society but a group with proper education and skillsets can do this easily.

Our role as a non-profit organization to become a bridge of connection between people who are in need of help and people who can provide support, and care services to needy people.

Our goal is to provide a bridge between those who are in need of help and those who can provide care services and support.

Road side education and education sitting on floor and at home is  not an experiment.It’s how people learned to function in the world for centuries And there is no reason to think people today cannot do the same thing. Rather such experiment  has proved to become ladder to reach higher study.

Mr. Biren Pandya, founder, Slum Shine organization is an environmental activist and social worker active since last 27 years for the betterment of society and environment.


Mr. Biren Padhya's mission is to save the planet and create a better society to live. From last few years, he is working for children of the slum community. Mr. Padhya helps to provide education to children from the slum community and motivate them to become Independent as well as a well-educated person with hidden skillsets and ability to stand alone in a rapidly growing society.

1990 to 1992:
Mr. Biren Padhya start movement to stop selling of snipe tailed lizards, birds and small animals like rabbits in local gujari market of Ahmedabad. He filled FIR against the selling of animals and save them.

Between 1992 to 2000 Mr. Padhya started an animal helpline and rescued many animals and birds.

2000:
In the year 2000, Mr. Padhya found that Gopalnagar lake, Kalol house of more than 300 Flamingos, Pelicans, Brahmani Ducks, Iranian Geese got dumped to build residential quarters. Mr. Padhya filled PIL against the constructors and fought well. In the end, Mr. Padhya got success and save the home of many birds.

In the same year 2001, Mr. Padhya worked for saving 12 lakes of Ahmedabad.

2003 to 2007:
Between 2003 to 2007 Mr. Biren Padhya, highlighted in many magazine and newspaper articles about his fight to save the nature and animals.

In the year 2001, Mr. Padhya got "Friends of Earth" award from The Earth Matters Foundation and got nominated for "Sanctuary Asia Award" by Shri Luv Kumar Khachar for nature protection.

In 2005, Mr. Biren Padhya got "People for Animal" card and appointed as "Animal Welfare Board Inspector" by the government.

In 2015, Mr. Biren Padhya got information about unofficial fishing and urbanization in Gujarat's second largest lake. "The Gosabara Lake" this lake is the house of Caspian Tern, Lesser Flamingo and more than 2,00,000 birds and the only place in India known for Dugong, a sea cow. With Mr. Bharat Rugani he filled petition against unauthorized fishing in the lake. Eventually, court-ordered to end fishing in lake and forest department declared Gosabara lake as a bird sanctuary.

In the same year 2015, Mr. Biren Padhya got news about the development of the Lion Safari Park in Dhari(Amreli). Ambardi the place where the lion safari park was going to develop is the main corridor for Asiatic Lion with the highest population of lion. It was dangerous for both lions as well as humans because of disturbance lions are attacking humans, lions are also at risk near human regions. That's why Mr. Padhya filled PIL to stop the development of Ambardi lion safari park. Gujarat High Court and Central Zoo authority ordered and ended the construction of Safari Park.

In the year 2016, A pregnant lioness found dead near Sagodara village. Mr. Biren Padhya wrote a letter to the forest department authorities about the unnatural death of lioness, but no response from officials. So, Mr. Padhya filled PIL and demanded electrification of the lioness to track their movements.

At Slum Shine, we work for providing motivation and education to children of the slum community. We run a roadside school where we provide regular schooling to slum children.


When we found a child with hidden skillsets and ability to learn we convince their parents and shifts them to the hostel and start their schooling. The reason behind moving them to hostels, our purpose is to maintain that there is no disturbance in their education. We also manage their higher education from top schools.

From the day when our movement begins, we helped approximately 67 slum children for their education. Also, from those children, 22 children are ready to study without convincing them.

We also take care of slum children about making awareness of different amenities used at various types of buildings and areas like shopping malls, airport, etc. We arrange picnics for them at heritage places and also take them to watch movies at theaters. We celebrate festivals with them like Diwali, New Year, Christmas, Holi, etc.

Currently, we are working on slum areas of Ahmedabad to help slum community children. Our roadside schooling is active in below-mentioned areas.

Our Activities for children of slum community:

At present our target of slum education to some targeted area

• AT Gulbai Tekara : We have 27 slum children of different community

Recently on 19th January Slumshine got grand success by giving admission a slum girl named Anajali Dataniya, Girl aged 5 years living on the footpath of IIM. Livinng road side oife we manage to pur her to admission at VISAO I kids foundation and make her admission to Delhi Public School in English medium. For this we convince their parents for permanent admission of their child at hostel,Our teacher educate andjali on the footpath. Now she has became polished diamond from road side stone of footpath. Many similar cases are their at Slumshine.

Our developmental activities for slum children

Our major spent on:

Our Proecess of roadside education to higher study is as follows

2. Schooling at foopath near their home

4. After year of schooling we convince their parents to allow children to study at hostels far away from city.

6. Our regular visit to the hostel and inspection to their education

Our expenses occurs for